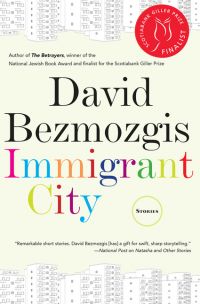 FINALIST FOR THE 2019 SCOTIABANK GILLER PRIZE

In the title story, a father and his young daughter stumble into a bizarre version of his immigrant childhood. A mysterious tech conference brings a writer to Montreal, where he discovers new designs on the past in “How It Used to Be.” A grandfather’s Yiddish letters expose a love affair and a wartime secret in “Little Rooster.” In “Childhood,” Mark’s concern about his son’s phobias evokes a shameful incident from his own adolescence. In “Roman’s Song,” Roman’s desire to help a new immigrant brings him into contact with a sordid underworld. At his father’s request, Victor returns to Riga, the city of his birth, where his loyalties are tested by the man he might have been in “A New Gravestone for an Old Grave.” And, in the noir-inspired “The Russian Riviera,” Kostya leaves Russia to pursue a boxing career only to find himself working as a doorman in a garish nightclub in the Toronto suburbs.

In these deeply felt, slyly humorous stories, Bezmozgis pleads no special causes but presents immigrant characters with all their contradictions and complexities, their earnest and divided hearts.

DAVID BEZMOZGIS is an award-winning writer and filmmaker. His debut story collection, Natasha and Other Stories, won the Toronto Book Award and the Commonwealth Writers’ Prize for Best First Book, and was a finalist for the Governor General’s Literary Award. His first novel, The Free World, was a finalist for both the Governor General’s Award and the Scotiabank Giller Prize. His second novel, The Betrayers, was also a Giller Prize finalist and won the National Jewish Book Award. His writing has appeared in many publications, including the New Yorker, Harper’s, Zoetrope: All-Story and The Best American Short Stories. David Bezmozgis has been a Guggenheim Fellow, a MacDowell Fellow, a Radcliffe Fellow and a Dorothy and Lewis B. Cullman Fellow at the New York Public Library. He is the director of the Humber School for Writers. Born in Riga, Latvia, he lives in Toronto.